WE’VE all been there with unwanted houseguests – the friends who promised they’d only crash on your sofa for a couple of nights; the in-laws who just won’t go away. But what about when those unwanted houseguests are of the four – or six – legged variety? More UK homes than ever are becoming riddled with unwanted household pests like bedbugs, ants, cockroaches, rats and mice and while it’s up to the tenant to keep their home bug-free and alert landlords in the case of any instance, many are falling far short of this responsibility.

Here are seven of the worst cases of household pest infestations that should have every landlord and agent speed dialling pest control. Warning – the following might make your skin crawl.

While records show there was a 28% rise in cases of bedbugs across the UK between May and June of this year (2019), one US case knocks spots off the rest. Exterminators in Maryland found a bed so riddled with bedbugs, the mattress looked like it had dandruff. Worst of all, the homeowner was still sleeping on it!

Student digs for a group of UCL students were so infested with rats and mice that the 87 of the worst affected tenants went on a rent strike back in 2015. Although the students were initially threatened with academic sanctions and exclusion from their courses, an inquiry found in their favour and the university was ordered to pay each tenant £1,300 or the equivalent of an entire term’s rent.

It was takeaways all round in Newham, thanks to slum landlords renting badly ventilated properties to tenants on the poverty line. In one property, rats the size of pint glasses took over the kitchen rendering the entire room out of bounds.

While you might primarily associate killer spider infestations with our friends Down Under, good Neighbours in Britain have also been caught in their web too. Following an influx of false widow spiders to British shores, one Southampton tenant was bitten so badly that he was left unable to walk for two months.

It’s no exaggeration to say that cockroaches make us feel sick but now it turns out that their presence in your home can actually mimic the symptoms of a cold or flu. But if you’re feeling bunged up, whatever you do, don’t reach for the Lemsip. Boiling the kettle can be a bad thing as one Hampshire based family found when they discovered their brand new coffee machine was infested with baby cockroaches.

Bringing new meaning to the phrase slow runner, one group of millennials in Essex were horrified to find trainers they’d left by their back door full of snails. It’s thought that by leaving the door partially ajar and not cleaning their kitchen surfaces after food preparation they’d created not just a haven for creepy crawlies but also an open door policy.

Bugs is one thing, but bugs with STI’s is quite another. Yet that’s exactly what British homes were hit with last year (2018) when a swarm of STI-riddled Harlequin ladybirds invaded homes across the country. Taking advantage of the warmer weather, the prolific ladybirds invaded homes by the tens of thousands. Brings whole new meaning to the phrase ‘lady in red’.


Agents or landlords wishing to educate their tenants as to the best ways to keep their homes clean and critter-free can download Fixflo’s FREE e-book: Tenant’s Guide: How to Prevent Pest Infestations. 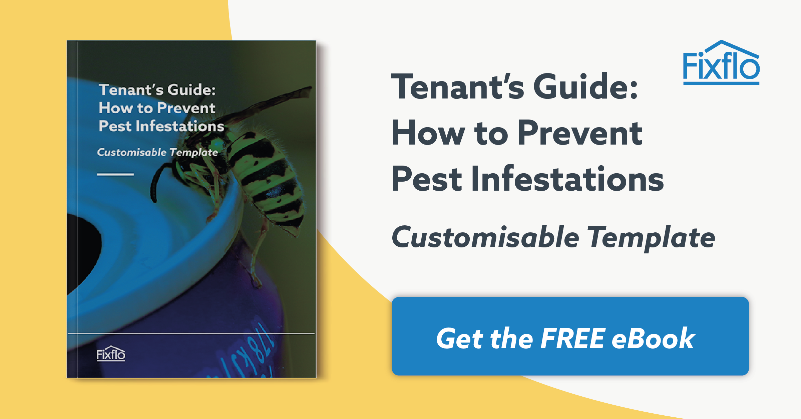 Content Marketing Manager at Fixflo. Reader and contributor on all things #propertymanagement.

Content Marketing Manager at Fixflo. Reader and contributor on all things #propertymanagement.

The best way to manage repairs

Learn how Fixflo can save you time and money.

These blog posts are the work of Fixflo and are licensed under a Creative Commons Attribution-ShareAlike 3.0 Unported License. In summary, you are welcome to re-publish any of these blog posts but are asked to attribute Fixflo with an appropriate link to http://www.fixflo.com